A
A
A
Menu主選單
﻿
Research Laboratories
﻿

Laboratory of Experimental Psychopathology and Psychotherapy
﻿

Laboratory of Social and Personality Development
﻿

THE STORY OF HOPE

Hope (Naked name) is a 15-year-old autistic boy with no language expression, his emotion and behavior are uncontrollable......

Hope (Naked name) is a 15-year-old boy. I have known him for 10 ten years. He first came to my office at the age of five. His mother hold him tightly, afraid that he would escape and make a sense. Hope, however, still up and down the chair, run around the room non-stop. He could shout sometimes, but silent most of the time. At the end of the section while Hope and his mother were leaving my room, Hope suddenly hold on to my leg and not letting go. Hope’s mother pushed and shouted wanting him to let go but was not successful. Hope’s mother asked, “Professor Chan, do you have any way to help him? We have tried all methods existing.” Hope had no language expression, his emotion and behavior are uncontrollable, Hope’s mother was exhausted.

Therefore, I have begun to investigate the Chinese healing concepts and methods as possible neuropsychological intervention for cognitive and emotion disorders since 2002. I chose to study Chinese medical approach because there has not been an very effective western intervention for autism, nor there is a drug that make autism curable.   Hope is always my first experimental subject! I first tried the plum needle stimulation in 2003. Although the children showed some progress, the crying and yelling of the children during the painful treatment made me stop the project. Then I developed a set of mind-body exercise and study its effect to improve their cognitive and behavioral problems and obtained very limited results. I then studied the stimulation of Dian Tian region as a way to improve the situation and the result is encouraging but limited.   Our progress is very slow, but Hope’s mother has never lost truth and hope. She has stand by us with every step of innovative experiments. Hope is always to first subject to try my novel idea of intervention. We have failed many time, but have not given up! Time flies and five years have passed.

In 2008, after five-year of unsuccessful try and error, I have begun to learn Chanwuyi.   At that time, Hope’s behavior and temper was out-of-control and had been on psychiatric medication for two years in order to keep him stable enough to attend school.  Hope, as usual, was the first subject tried my experimental intervention.   Six months later, Hope is off the psychiatric medication, and his ability to control his temper has much improved, and he no longer hit or bit others. His mother wrote on his daily progress note as the following:

“ He went for piano lesson, and he made an error. The teacher required him to move to away from the piano and sat on another  chair so that she could demonstrate the correct technique for him.   He used to react to this kind of order by shouting and running around. But he was able to keep clam and move to another chair.

He used to be very frustrated and angry when he made a mistake when drawing picture. Today he used a wrong color, but he did not break in temper and changed the color patiently.”

Hope likes to draw. Give him a piece of paper and he will express him inner world on the paper. The following are two drawing from Hope. One was before the intervention and the other was one year after the intervention. His heart and mind have improved, to a more beautiful level. My mind is at ease.

One year after the intervention:

Nei Yang Gong (the Kungfu for enhancing internal energy) has been passed down for ancient Chinese as an effective intervention for improving mind and body, and is one component in the Dejian Mind-body Intervention. Our recent study has examined its effectiveness scientifically. The results showed that even autistic children with lower functioning levels, showed improvement on their self-control after learning Nei Yang Gong for a month. A control group who learned progressive muscle relaxation, a well-established technique to alleviate anxiety, showed fewer improvements.

The study examined 40 that children with autism, half of them practiced Nei Yang Gong and another half tried progressive muscle relaxation. The children (age 6 to 17 ), attended two one hour classes weekly for four weeks. The children were required to practice at home, and about half them reported practicing at least six days a week.

During the Nei Yang Gong sessions, a clinical psychologist taught the children eight movements. The purpose of the eight movements was to help the children relax, better control themselves and increase the tone of their muscle.  The children in the control group learned how to tense and relax their muscles, and also learned some social skills and emotional controls.

Before the intervention, all of the children had similar levels of self-control, according to three standardized neuropsychological tests.

After the intervention, the children in the Nei Yang Gong classes showed significantly better (i.e., four times as much) self-control than the controls. They showed less impulsivity and their ability to control their tempers was improved. In contrast, the control group showed little or no improvement in these measures. Parents of children in the Nei Yang Gong group reported that the children were being more sociable and more aware of their environment. We used the electroencephalography as a measure of the brain's activity of the anterior cingulate cortex (ACC). ACC is a part of the brain that mediates inhibition, and previous studies have shown that children with autism have less activity in that region than controls do. In this study, children in the experimental and control groups showed similar levels of activity in the region at the beginning of the study. After the intervention, the children in the Nei Yang Gong group had significantly more activity in that part of the brain than they did before. However, the control group showed no significant change.

Children practicing Nei Yang Gong seem to benefit from the therapy in a short period of time (i.e., one month), and it even low-functioning autistic children can benefit from it. The results suggesting that it could be a valuable intervention for children with autism.

“We are what we eat”. In indeed, children with autism, who have difficulty to control their behavior, showed improvement after following the diet accordingly to Chanwuyi principle. How long to see the effect? One month.

In the study, we randomly assign half of the twenty-four autistic children to the experimental group (i.e., with diet change) and the other half to the control group (i.e., without diet change). Parents of the experimental group children were recommended to modify their children’s diet by reducing the intake of ginger, garlic, green onion, spicy food, eggs, meat and fish for one month. These foods, according to the Chan-medicine principles, can easily generate excessive internal heat inside the body, which in turn, adversely affect one’s temper and cognitive functions. Therefore, changing dietary habit is one of the key components in Dejian Mind-body Intervention to enhance one’s psychological and physical health. To ensure a well-balanced nutritional diet, the experimental group children were also advised to take one to three kinds of food from each of the seven “good food” categories every day as listed in the table below. In contrast, parents of the control group children were informed to maintain their dietary habit as usual throughout the study period.

After the one-month period, children with diet change, even among those with limited intelligence, became more flexible and efficient in tackling problems and more capable of controlling their impulsive acts as revealed by their about 50% improved performance averaged across the standardized cognitive tests. Such extent of improvement is more than a triple of that in the children without diet change.  Consistently, parents also reported that their children had better social communication with others and reduced repetitive behaviors and loss of control after changing diet.

Furthermore, the one-month diet modification has even changed the children’s brain activity level as measured by the EEG technique. There was a significant increase in the activity level at the anterior cingulate cortex (a brain region responsible for self-control ability, which is circled in figure below) in children having diet modification, but not in those without diet change.

The encouraging findings of this study may provide a cost-effective alternative method for parents with autistic children to improve their difficulties in flexible thinking and self-control. More importantly, it offers a hope to parents with low-functioning autism to enhance their functional level and potentially their quality of life.

One of our study, which was published in the Journal of Affective Disorders, showed that a newly developed Chinese Chan-based Dejian Mind-body intervention (DMBI) had positive effects on improving mood and health conditions of individuals with depression who were taking medication.

This study compared the treatment effect of the DMBI and Cognitive Behavioral Therapy (CBT) on seventy five participants diagnosed with major depressive disorder. Those participants were randomly assigned to receive either 10 sessions of CBT or DMBI, or placed on a waitlist. The participants were evaluated by psychiatrists who were blinded to the experimental design, and their cognitive abilities were measured by standardized neuropsychological tests. The results showed that participants who had received the Chan-based mind-body intervention showed a significant reduction in depressive mood, and there were significantly more participants showing reduced dosage of anti-depressants as compared with those in the CBT group.

This mind-body intervention is newly developed based upon the Chinese Shaolin Medical principle, namely Chanwuyi (i.e., Chan, martial art and healing). The principle of this mind-body intervention is to alleviate psychological distress by understanding the root of problems in accordance with Buddhism philosophy, and to enhance mental and physical health by practicing some mind-body exercises and reducing the intake of some kinds of food that will generate excessive internal heat.

“A major difference of this intervention from conventional psychological interventions is that it emphasizes an integrative treatment on the mind and the body, that is to change the thought process and change the lifestyle to improve mental and physical health simultaneously. It is a Chinese wisdom of living that we have recently adopted for clinical application,” said lead author, Agnes S. Chan, Ph.D., a professor at the Department of Psychology at the Chinese University of Hong Kong. According to Prof. Chan, this intervention showed some effects that were not observed in the commonly used psychological intervention. Such additional effects included improving the gastrointestinal health and some cognitive functions. This promising research warrants further study, and suggests that Chinese Chanwuyi practice may be considered as a potential intervention for improving psychological and physical health.

Forgetfulness is a common problem associated with aging. Every older adult has experienced forgetting things at some point in time such as forgetting where the keys place or what should be done. Some degree of memory difficulty is fairly common in older adult; however, some types of memory loss may be a sign of early stage of dementia.
While normal age-related memory loss doesn't prevent an older adult from living a full and productive life, progressive dementia will eventually cause the elderly to be totally dependent. Thus, maintaining or improving memory in late years of life is a very important issue.

We have studied the potential benefits of Dejian Mind-Body Intervention on enhancing verbal memory in 46 older people (aged between 60 and 83 years) with lower memory function.

The intervention consisted of 12 sessions, 90 min per session each week. The intervention involved componentsof adopting a special vegetarian diet, practicing a type of mind–body exercises, and learning self-realization.

Their memories (including verbal and visual components) were assessed before and after 3 months intervention. Elderly with lower memory function at the baseline (i.e., their performance on standardized memory tests was within 25th percentile rank) showed a significant memory improvement after the intervention. Their verbal and visual memory performance has showed 50% and 49% enhancement, respectively. 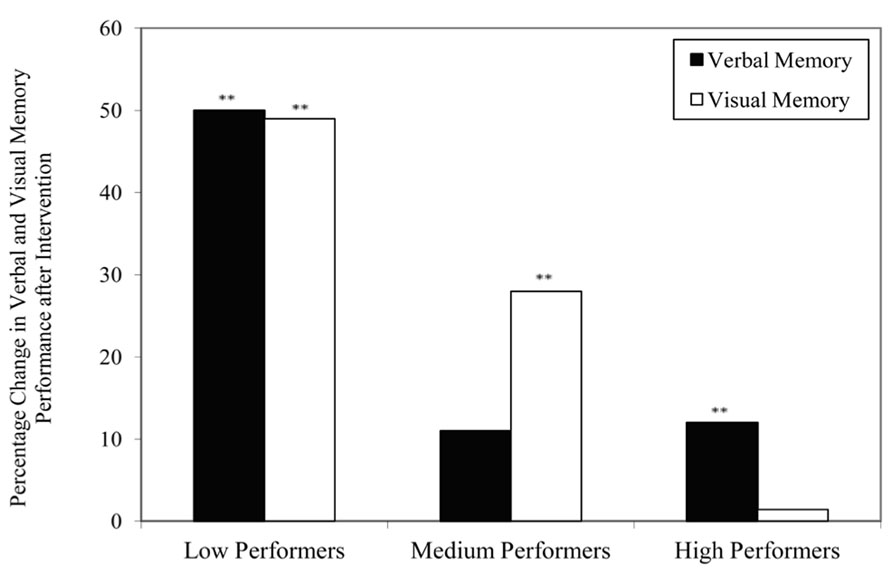